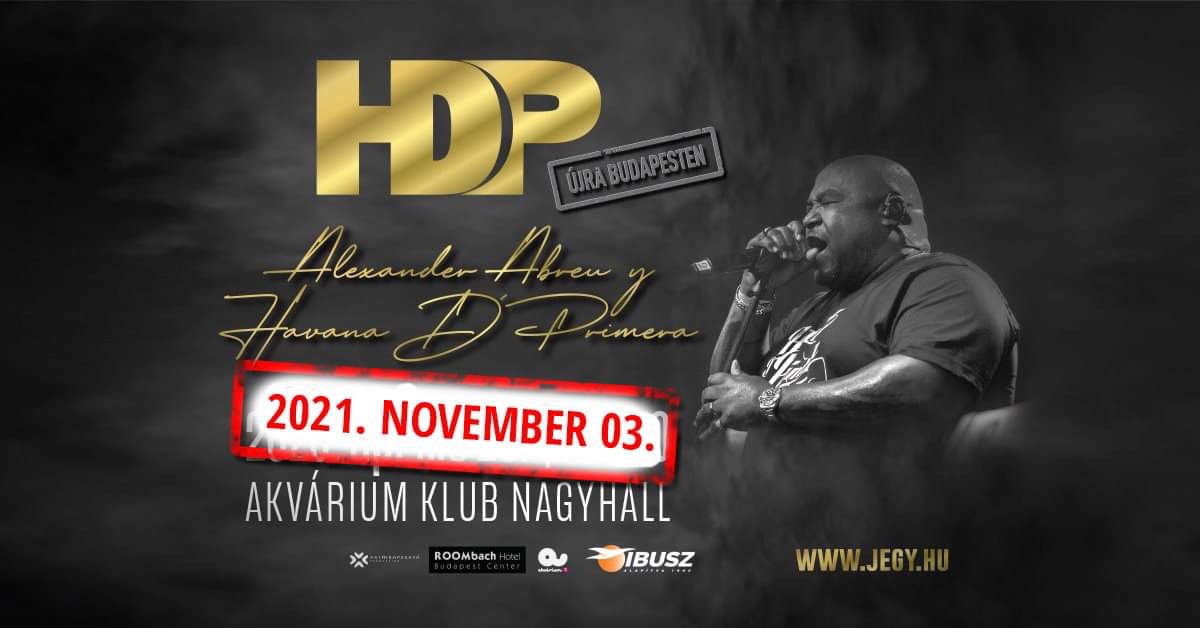 Alexander Abreu and his Havana D’Primera will be back in Budapest!

Following their unforgettable concert last year, we are looking forward to another great party with the best orquestra of the modern era of salsa music!

The band is formed by the new generation of Cuban musicians and has became the most popular of this era and proved to be also the most wanted by fans all over the world. The orquestra was founded by the great Alexander Abreu and beside being one of the best in timba music, they have clearly shown that they can perfectly combine traditional musical styles with modern instrumental set up and the best proof for that is the song from the album „La Vuelta el Mundo”, that has ever been one of the most popular Son pieces: „Venenosa”.

The band of 17 musicians has been extremely successfull since it has been founded. The director and lead composer, Alexander Abreu is a Latin Grammy Award winner trumpet player with a unique, amazingly stong and unmistakable voice – due to the trumpet – and is identified as a great singer and highly educated musician. In the colorfull repertoire we can find salsa, jazz, funk and afro-Cuban fusion as well.

The orquestra has 4 album since their foundation. Their first CD, „Haciendo Historia” was released in 2011 and had an unexpectedly fast and undoubtedly loud international success, followed by the single hit „Pasaporte” in 2012, which gave them worldwide popularity as it has been selected as the best latin album by the audience of NPR.

The very first song on this album is highlighting Alexander’s respect for Cuban musicians, as the song „Resumen de los 90” is giving credit of the music of the 90’s. Other songs like „Mi Musica” and „Cuando el Río Suena” are emotional and by their carefull instrumentation both touch the heart of all lovers of Cuban music. Beside that, the dynamics of „Oni, Oni” has always been a magnet ever since for dancers to hit the floor. This song has even inspired such Cuban artists like Yanek Revilla and his group, Sabor DKY to create amazing choreographies (https://www.youtube.com/watch?v=GMod4O0hfDQ).

There are songs on the album „Pasaporte” that are considered to become evergreen as time passes by. „Al Final de La Vida” is simply amazing and „El Paso de la Bailarina” is implementing modern rythm to the album.

The strong start has been followed by same quality pieces, „Me Dicen Cuba” was released as a single and also as a teaser for the album „La Vuelta al Mundo”, which has been nominated as the best salsa album for the Latin Grammy in 2015. The same album also included songs like „La Peligrosa”, which is used by dance schools and DJ’s around the world as one of the hits of any party or class.

The last album of Havana D’Primera, „El Cantor del Pueblo” was released in 2018. and was also nominated for Latin Grammy. The most popular song from this album „Tres Diás” is a on the top of salsa charts since it has been out.

After the concert the fiesta won’t stop. DJ DEE and DJ FEREE (salsa) will play the best selection of Cuban music.

“(2) The premises of music and dance events can only be visited by individuals immunized against the coronavirus infection as well as individuals under eighteen years of age under their supervision.”
Accordingly, our concerts can be attended by minors in the company of an adult with a valid immunity certificate.

A single adult with an immunity certificate may accompany no more than one minor to an event.

Events starting after 10:00 pm may only by attended by guests over 18 years of age with a valid immunity certificate.