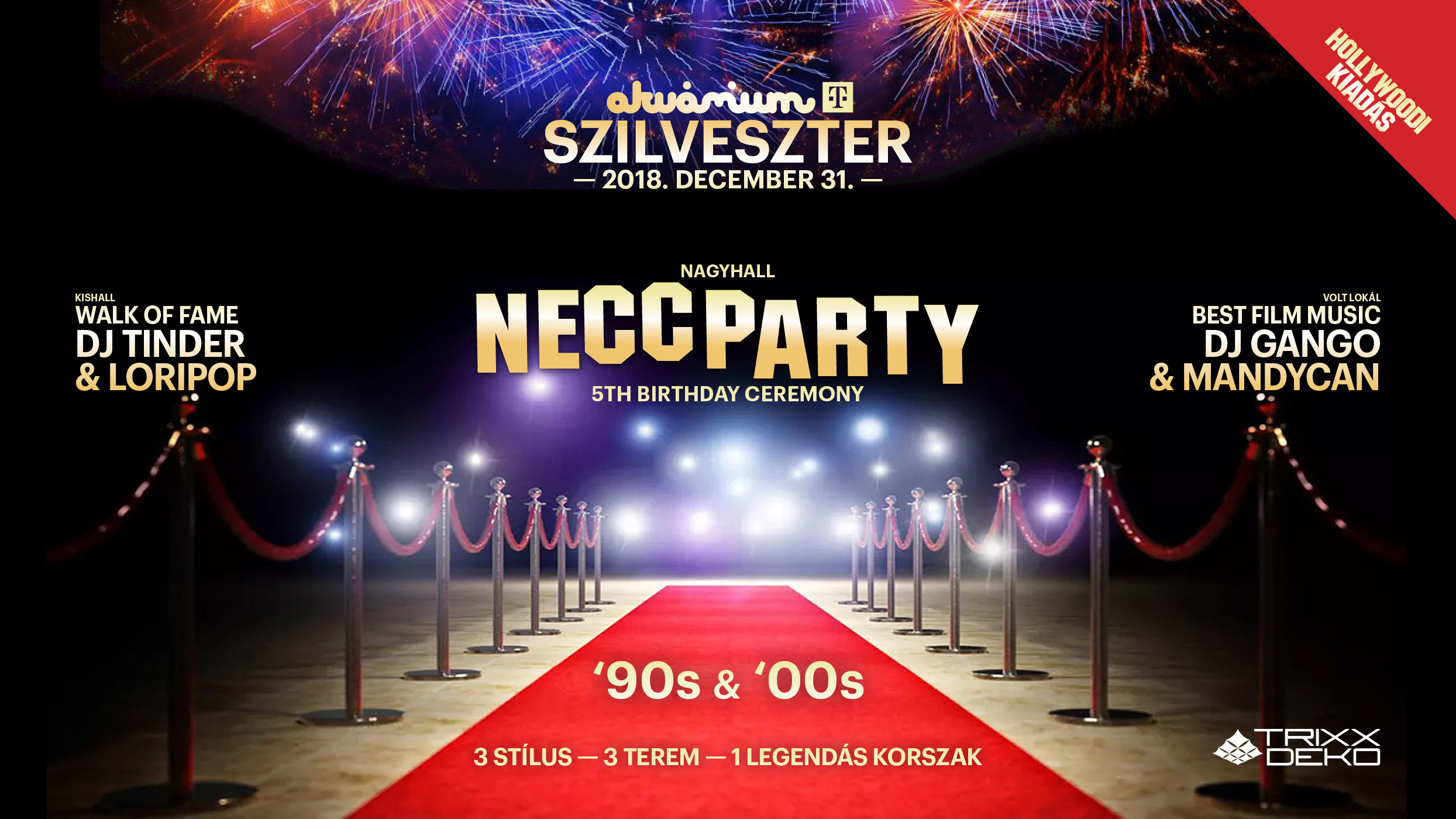 This year, Akvárium Klub is offering a real New Years Hollywood time travel experience. On 31 December, we’re breaking out the disco balls with three thematic rooms offering a trip back into the glamorous 90s and 00s. It’s also the occasion for Necc Party to celebrate its 5thanniversary with the “cheekiest” hits of the era. The SmallHall will be reconfigured into a boulevard of Hollywood stars, coupled with iconic film music at VOLT Lokál. We’re also hosting another “retro raffle draw” for early arrivals.

After last year’s huge success, Akvárium Klub invites everyone for another time travel, on this occasion, with a Hollywood special edition: the event hosted in 3 halls promises to be the most glamorous party in the city! Decorated with giant ghetto blasters and LP records, the Main Hall will be hosting the biggest house party in the country with Necc Party celebrating 5 years of packed dance floors. As usual, they’ll be delivering the cheekiest, yet also best tunes from the 90s and 2000s: Britney Spears, Backstreet Boys and the Spice Girls, with constant singing, err….shouting the lyrics out loud – naturally, in a slick, hot fashion.

The SmallHall – aka Walk of Fame – will be turned into the boulevard of Hollywood stars for one night only, delivering legendary tunes from legendary performers from this unforgettable period. We’ll have a little pop, a little rock and some hip-hop with ‘top’ vibes thanks to Dj Tinder and Loripop.

For New Years, VOLT Lokál will be turned into the Best Film Music hall, with iconic film hits from the 90s and 2000s, in the company of imitators of illustrious film stars. Bust a move to the tunes of The Mask, Trainspotting or Pulp Fiction or slow dance to the Titanic theme song – as delivered by Dj Gango and Mandycan.

It’s worth showing up on time, as all those who arrive at Akvárium Klub between 8:30 and 9:45 pm are automatically entered into the Raffle Draw taking place at 10 pm, featuring valuable prizes, including Sziget, VOLT Festival, Balaton Sound and STRAND Festival passes, Akvárium Klub gift packages and a host of other prizes.

The renewed and expanded Akvárium is characterized by multifunctional spaces, a bistro restaurant, elegant design and professional architectural solutions.